People were offering to help us left and right. They were praying for me and “officially” announcing my situation at church in front of so many people. I had heard talk of tee shirts, wristbands, badge holders. All things that people were doing out of the absolute goodness of their hearts, but the thought of being the center of attention on such a large scale, sort of made me want to vomit.

I have always been slightly socially awkward. My dad and siblings can talk to people with such ease, and I usually end up standing awkwardly to the side, hoping people forget that I’m there. It takes a few times of talking to me to realize I’m not quite as awkward as I first seem. Only slightly!

Don’t get me wrong; once we get to know each other, it’s hard to shut me up, and I have actually gotten much better than I used to be.

I swear I did not order my own food at restaurants until I was well into high school; always having my parents or siblings order for me.

To this day a waiter could bring me the complete wrong meal with a giant hair in it, and I would accept it with a polite smile.

After this week, it was clear that God was going to pulling me kicking and screaming out of my comfort zone.

I was going to be in the sympathetic limelight, and there was nothing that I could do about it.

I wanted to keep my lousy news quiet until we had some answers, but that ship had long sailed. I was so worried people would bombard me questions I didn’t have the answers to, and I was not mentally prepared for that.

Much to my surprise, it wasn’t people prying or drilling me with questions, but people graciously offering prayers and support, both physical and emotional.

I had two options. I could keep everything a secret and decline all of this help people were offering so freely, or I could be upfront and accept these sincere acts of charity with as much grace as I could muster.

Every time I saw someone from my family they were telling of another person or organization that had plans to help Jordan and me. It was so overwhelming. I didn’t want to put people out or have them think I was abusing the charity they had offered.

In light of all of these people coming out of the woodwork to offer their help and my ever growing anxiety over all of this, the night before my PET scan I bargained with God, big time!

I was so concerned that my diagnosis would turn into a spectacle with my name being plastered all over Facebook or my face on posters for benefit dinners. (These are an introvert’s WORST nightmare).

I prayed and begged God for good PET scan results, and in turn, I would let him make as big of a spectacle as he wanted. (Not the most spiritually mature thing to do, I’m sure) Shoot! I would print off the posters with my face on them myself! I would accept the help offered to me, not turn people away, tell everyone what God had done for me, if he would just heal me.

Well, the next day, as you know, yielded fantastic news from my scan and the morning after that…God made a pretty funny joke.

We dropped the kids off at our babysitter pretty early that next morning. I hadn’t been able to see Robbyn the day before because of my slightly radioactive status and wanted to be there in time to feed her.

We had not been in the room 15 minutes when a tall man in a suit walks in from ”marketing” and says they are shooting a video for nurses’ week and wanted to get shots of a NICU nurse with a family. Our family. 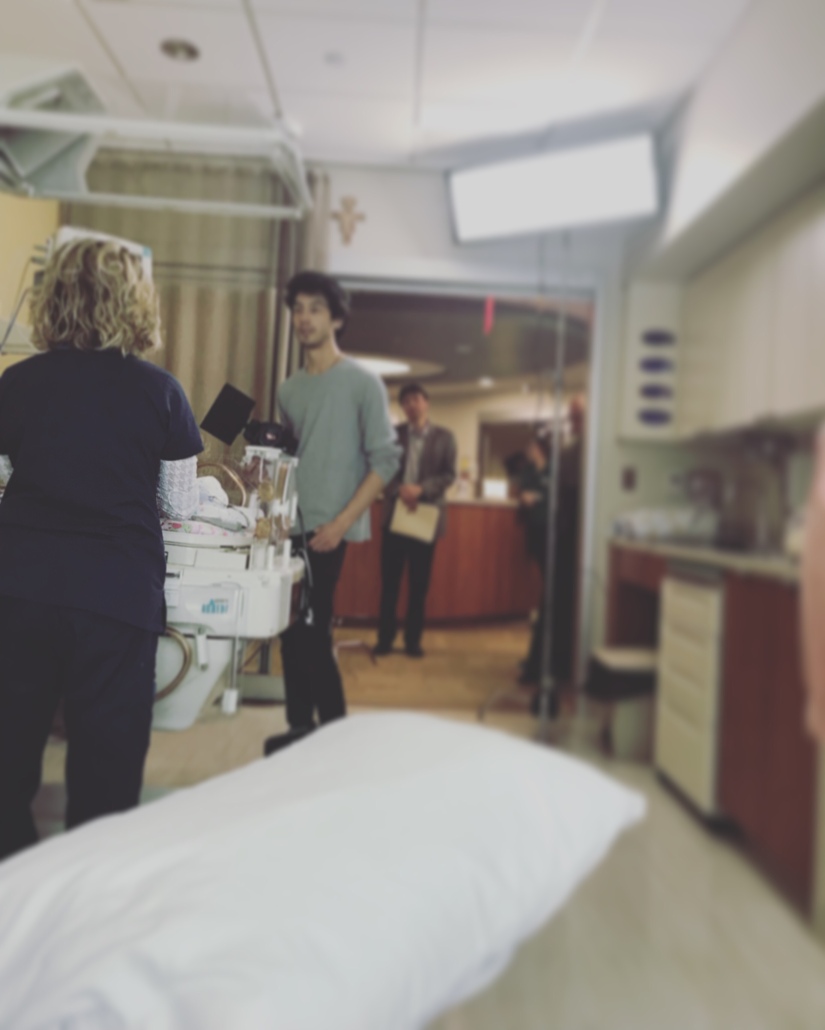 It was quite a production. Lights. Camera. Action.

Well if you think I’m not a fan of being in the spotlight, then you should meet my husband! Compared to him, I have the social graces of Miss America. I’m pretty sure most people think he is in physical pain during social gatherings based on the RBF plastered on his face.

We are a great deal alike though, in that once you get to know him he doesn’t stop talking, and he is loud. Seriously loud.

He yells all the time in the same tone whether he’s happy, mad, funny, or quoting a movie (which is a well-honed skill of his).

I swear, he is so loud that all of our children knew his voice better than mine at birth.

So, this marketing guy really didn’t know how horrible of a situation he was putting Jordan and me in.

I’d done it though. I told God I would gladly be made a spectacle of and he delivered, very quickly I might add.

Now, God has blessed us with free will and I had every opportunity to say no, but I was serious when I bargained with him.

I wanted to be obedient, and see the plan he had in store for me.

I have failed in the past when God has given me opportunities to share my faith and chickened out; using my God-given awkwardness as an excuse. I didn’t want to fail him again.

There is a man in the Old Testament, in Judges Chapter 6, named Gideon. He lived in occupied Israel, and when God appears to him, he is cowardly threshing wheat in hiding, so his food isn’t stolen by the country’s enemy, the Midianites. God is coming to Gideon to tell him to raise up an army to rebel against Israel’s captors. God arrives on the scene and says “The LORD is with you mighty man of valor!”

God is calling this man to do something extraordinary. A man who is clearly not acting very bold or mighty. A man who is a farmer, not a warrior. A man who knows “My clan is the weakest in Manasseh, and I am the least in my father’s house.” (Judges 6:15).

He has some legitimate concerns if you ask me.

Gideon and I have a lot in common. Mainly, we are cowards, and we come prepared with excuses.

But thankfully, another thing Gideon and I have in common is that we serve a God who sees us not as we are, but as the extraordinary people HE created us to be.

God came to cowardly Gideon and called him a mighty man of valor. God saw Gideon as the marvelous creature he designed and gifted with the ability to do great things for God. Gideon didn’t even want to believe it when God himself told him.

I could feel God calling me to be brave.

To step outside my comfort zone.

He has a job for me to do and I have been hiding. I’m not special. He has given the same calling to me as all Christians.

(So if you don’t think you know what God is calling you to do, start there!)

I have been so cowardly in the past. I have missed so many opportunities to share the love of God with people. To share how great my life is because of Jesus Christ. That I have peace and hope because he died for me.

How could I experience this magnificent love and not want to tell everyone I meet?

I mean, seriously, when I can tell the cashier at Walmart how to get great discounts at Dunkin Donuts but am too scared to tell them Jesus loves them… That is a problem.

I think God used this nurses’ week commercial as a way to pull me a little further out of my comfort zone before he pushes me head first into the waters of something great.

I don’t know exactly what that is, and to be honest, it makes me nervous but as Judges 6:14 says “Go in this might of yours, and you shall save Israel from the hand of the Midianites. Have I not sent you?”