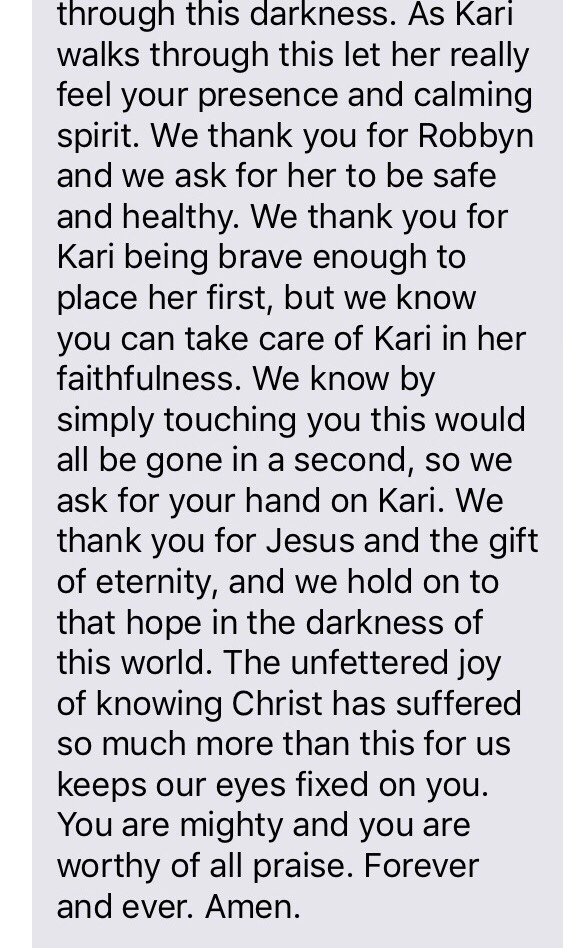 Adam was still is Europe but sent me this prayer in the wee hours of the morning before we met with Community Breast Center. The day before we had received a very bleak prognosis and I was trying my best not to panic. I just kept thinking, “It’s in God’s hands.” I just want to stay in his will for my life.

Nevertheless, in the back of my mind, I could hear “What if God’s will is to take me home to heaven sooner than I planned?”

That was a possibility. It still is. It is for all of us really.

That is where the hope of salvation comes in. Not to be a Debbie-Downer but if you think you are making it out of this world alive you are going to be very disappointed one day!

That is why I feel so strongly about this blog. I am here to tell you if you haven’t heard it before, Christ died for you.

And if you were the only one who ever accepted his free gift of salvation, He still would have died on the cross just for you and you alone.

As Adam said in his prayer, “We thank you for Jesus and the gift of eternity, and we hold onto that hope in the darkness of this world. The unfettered joy of knowing Christ has suffered so much more than this for us keeps our eyes fixed on you.”

Well, Tuesday morning came. We dropped the kids off at the babysitter and went to carpool with my parents. It was no surprise to find my mom in the kitchen doing what she does best, stress baking.

I was rereading a couple of psalms from my bible over and over again to calm my nerves, while Jordan and my dad ate an unhealthy amount of oatmeal cookies.

The breast center had called the night before and told us in addition to meeting the surgeon; we would also have an ultrasound of my armpit (to see if my cancer had spread), meet with a geneticist, the medical oncologist, and finally the breast surgeon. We had a full day ahead of us. Since the past Saturday, I had been keeping a little notebook full of doctors’ names, information, appointments, and many, MANY questions. On the way up there, mom and I added to our seemingly never-ending list of questions.

Once there, I was whisked from appointment to appointment. Every single person there knew who I was and knew the order of events for the day. They all called me by name and treated me like a person (a person who was scared out of her wits but a person no less). The only missing piece about choosing Community Hospital was I still didn’t have an OBGYN or a Maternal Fetal Medicine doctor at a hospital with a NICU.

We had called the office of the OBGYN and the Maternal-Fetal Medicine doctors several times trying to explain the situation, and the soonest date they had to get me in for an initial visit was two weeks away!

Well, my breast surgeon took care of that too. While I had the ultrasound on my armpit, a nurse came over to tell me that my surgeon had personally called and got me an appointment with the OBGYN that Thursday. I was really liking this lady already, and I hadn’t even met her yet. So the only piece missing from our puzzle now was a maternal-fetal medicine doc.

While that was being figured out, I still had a long day of information ahead of me. It was terrifying not knowing what kind of information bomb was going to be dropped on me next. Every time someone walked into the room I could feel my stomach drop before they even started talking.

I got my first piece of good news that week.

The ultrasound technician ran her pictures past the radiologist and came back to the room to tell me my lymph nodes looked clinically normal. Thank you, God!

Next on our parade route was meeting the medical oncologist. She came into our very crowded room (Holly had high-tailed it up from Cincinnati by this point and I had two nurse navigators in the room as well) and took me out to examine me in a more private setting.

After explaining how I found the mass for what seemed like the hundredth time that week, she proceeded to tell me that I had done a great job of catching this so quickly and she confirmed that my lymph nodes looked good on the ultrasound as well.

We rejoined the rest of my posse so she could go over a treatment plan. She had a paper in front of her where she wrote down the stage (2), the chemo drugs I would get and how often, the side effects, and then she very confidently circled the box that said cure! CURE!

We asked her many of the questions we had about how this would work with Robbyn still in utero. She explained if we couldn’t get her delivered within two weeks we would go ahead with chemo while pregnant. She went on to explain if we could get her delivered soon, then I could start chemo soon after. I asked her how soon that would be (the doctor the day before had told us 4 weeks) and she responded with “immediately.”

I need to tell you at this point it was at least 5 o’clock, and it was clear that everyone in the building was staying late to accommodate me, doctors included. Now, it was time to march this parade upstairs to the breast surgeon’s office.

She took Jordan, and I back to an exam room, and she performed a breast exam. (I had lost all concern for modesty at this point) She left my gown open and walked across the room and bent down to look at my chest squinting and bobbing from about 5 feet away. It was comical, to say the least.

She and I could both see Jordan looked very disturbed in the corner of the room and I wish I could have taken a picture of his face; it was priceless. She then said, “I’m doing this because nowadays almost all breast cancer patients are survivors and we want to make sure you look good when this is over.”

That was twice in an hour that I was told I would live! She also told me she called the maternal-fetal medicine doctor AGAIN and arranged for me to have an appointment with him the same day as the OBGYN (That Thursday!)

The meeting with her went very similar to the one with the oncologist. She explained my tumor pathology and staged me as 2B based on the large size of the tumor, and we would do 8 treatments of chemo over 16 weeks, double mastectomy, and radiation. She whipped through some more information, and when she got done, she asked if we had any questions. I looked through my list of questions, and she and the oncologist had answered every single one. Holly said “Look at your book. Did everything get answered?” This was the reason I wanted her here. She is my big sister and my forever protector. She is assertive and confident, two things I have always wished God had blessed me with. She has always pushed for me to be heard even when I don’t want to make waves. But her concern was unwarranted this time because both doctors had answered every single question!

Very few times in my life have I been absolutely sure of what God wanted me to do in a situation. To be fair, the blame should fall on me because as I mentioned have not been very good about giving God control and praying with the fervor I had been this week.

I felt this was God’s clear answer about with whom I should entrust mine and Robbyn’s care. Every single question or concern that I had was answered with confidence and clarity by both of my doctors.

God had directed us here.

As my mom said, God gifted these women with the intelligence and the drive to become doctors and prepared them with the knowledge and experience to provide me with the right care. Now don’t get me wrong, I know I’m not the only reason these women went to medical school, but I am a tiny part of a story that God set into motion years ago.

I have read and re-read the prayer Adam sent to me so many times on our short journey. Healing is in Christ’s hands. I will continue to hold on to that hope and that he will leverage it ALL for his kingdom and his glory.

He is able. I am faithful. 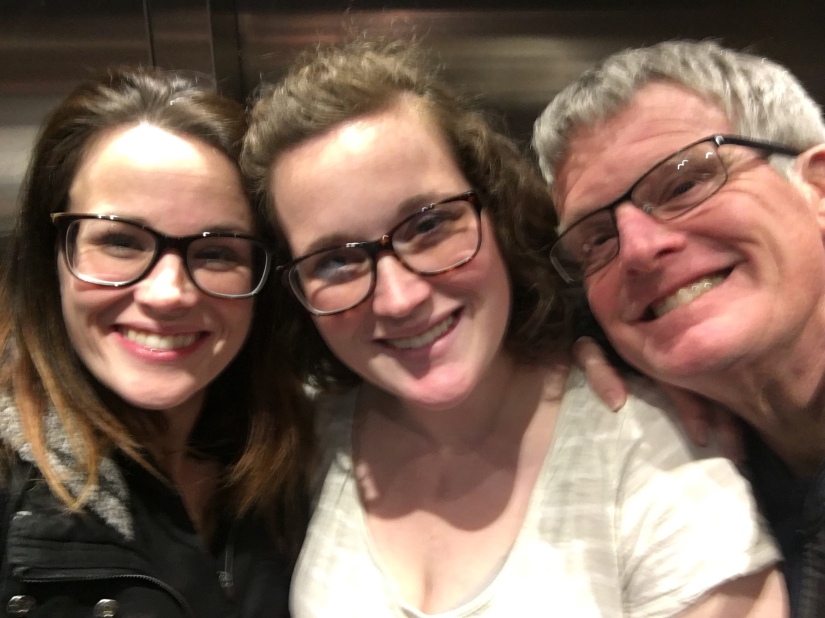 Our elevator selfie after we heard the word cure! I am the happiest person to ever find out they were getting chemo!

3 thoughts on “He is able. We are faithful.”